im partway through the assembly of the above. I think I'm missing a piece of metalwork that goes over the carb area. On pics I've seen the outer of throttle cable attaches to it. I'm also not sure where/how the governor spring attaches. It's an Aspera HTB 25 with Delorto FHC 20.13 carb. I have the drawing and parts list but it doesn't show what I need. If anybody has one of these or pics I'd be eternally grateful for any information as I can't get any further with this now. Thank

I’m thinking a right angle with a slot for the throttle arm, clamp for the cable and two holes where it bolts to bosses on the manifold ?

Pls post a side on image of the manifold and carb. 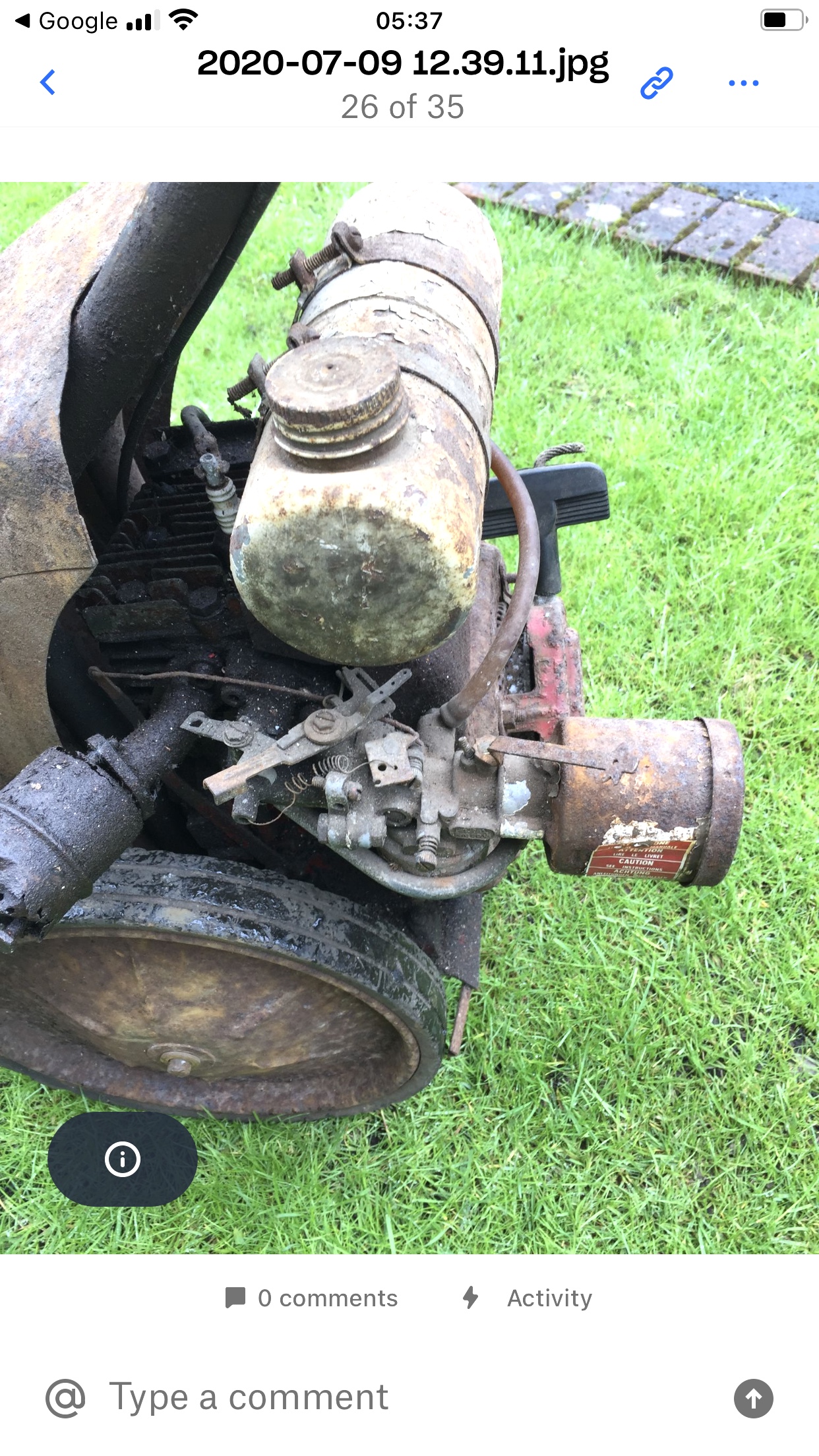 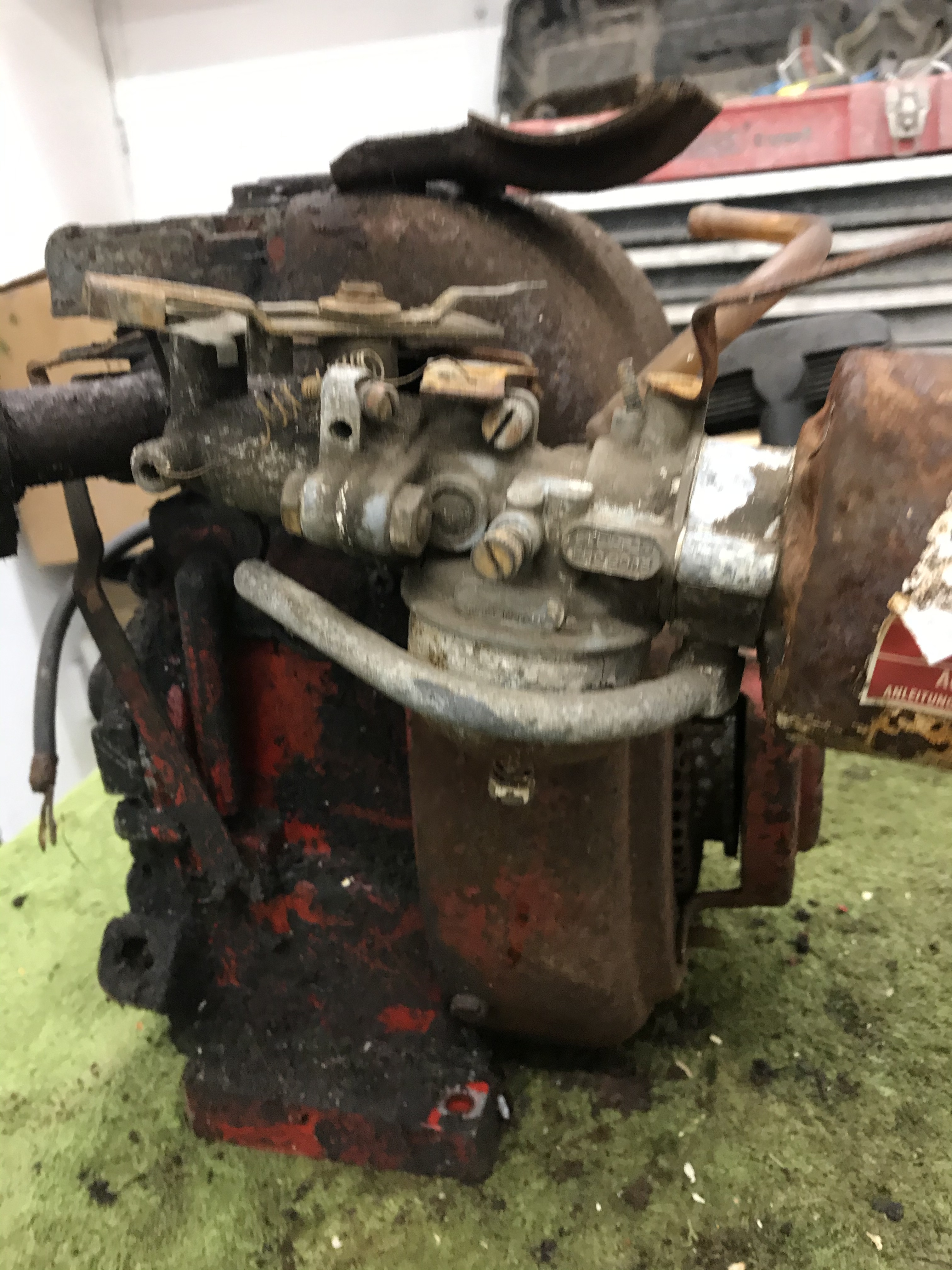 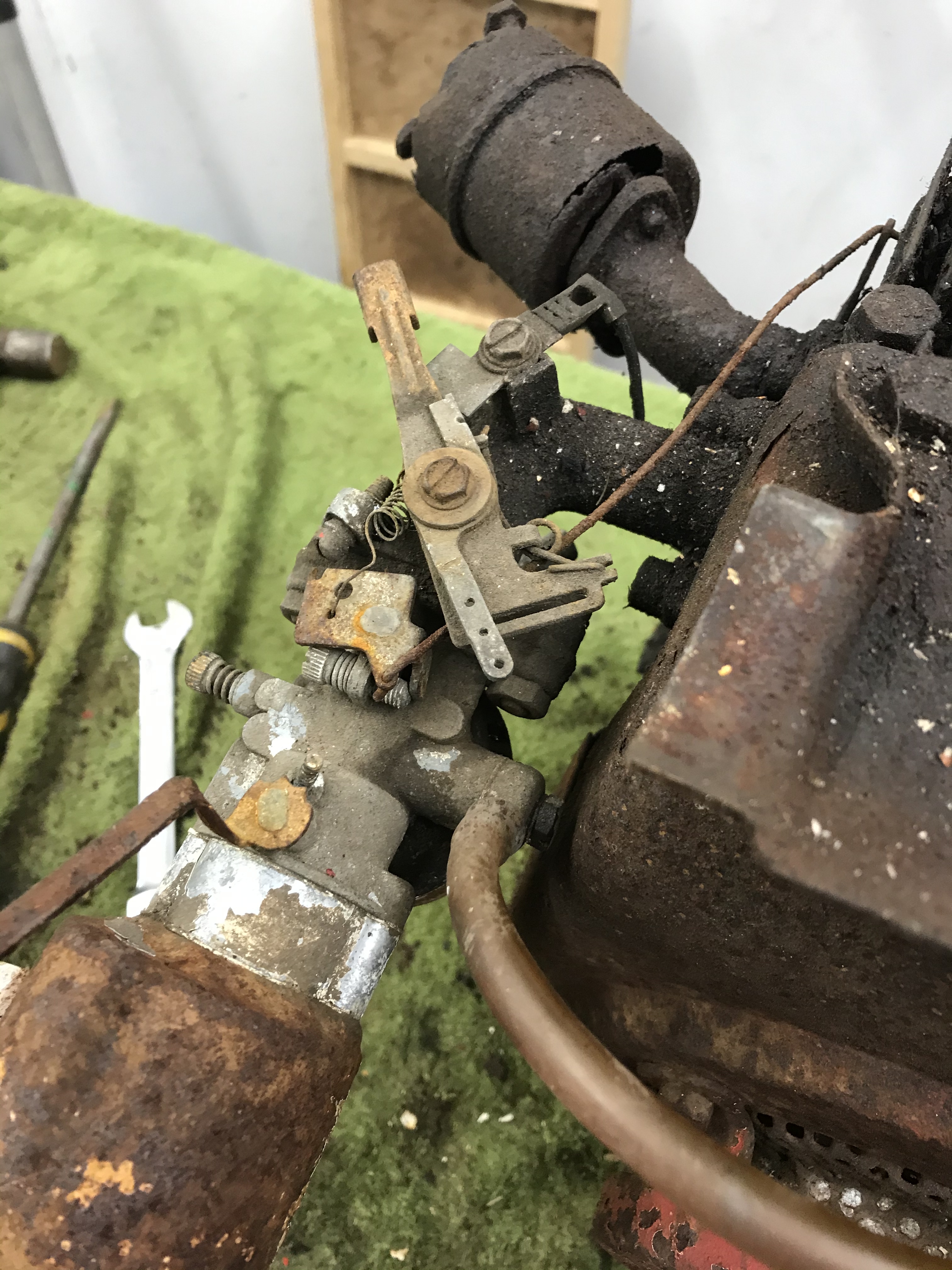 the breather tube in middle pic, does that connect to anything?

Breather tube. No, in those

Breather tube. No, in those days they just vented to atmosphere. Inside the valve chest cover there’s possibly a loose woven fibre filter pad to catch oil vapour etc .

Carb cover. Probably not what I had in mind as the lever has no hole in it for a cable so probably just has a friction pivot. I don’t think that I have any better images than the that I posted a while back but I’ll have a look . It would help ( me anyway) if you posted all the correspondence for one machine as one thread - may save irrelevant duplication.

I've kept a fair amount of

I've kept a fair amount of new and used Aspera, Tecumseh and Tecnamotor parts from my defunct business, but I don't understand what part you're looking for here?

Some owners don't know about the 'back kicking' facility on these machines, you simply loosen off the clamping handle and turn the whole implement end around 180 degrees, then re-locking the clamp down. It helps to do odd corners and to get out of holes etc.

I may have a new silencer for one of these engines somewhere.

It should have a cover, but,

It should have a cover, but, as Wristpin has pointed out, there doesn't seem anywhere to connect the throttle wire to. As for that pipe bent around the float chamber, it is undoubtedly meant to connect to the engine breather pipe. This would ensure that dirt would not enter the engine via the breather.

It should have a cover, but,

It should have a cover, but, as Wristpin has pointed out, there doesn't seem anywhere to connect the throttle wire to. As for that pipe bent around the float chamber, it is undoubtedly meant to connect to the engine breather pipe. This would ensure that dirt would not enter the engine via the breather.

Don’t think so , difficult to see , but that pipe is not attached to the rubber breather pipe. The parts book just shows the rubber pipe as in the OP’s image. 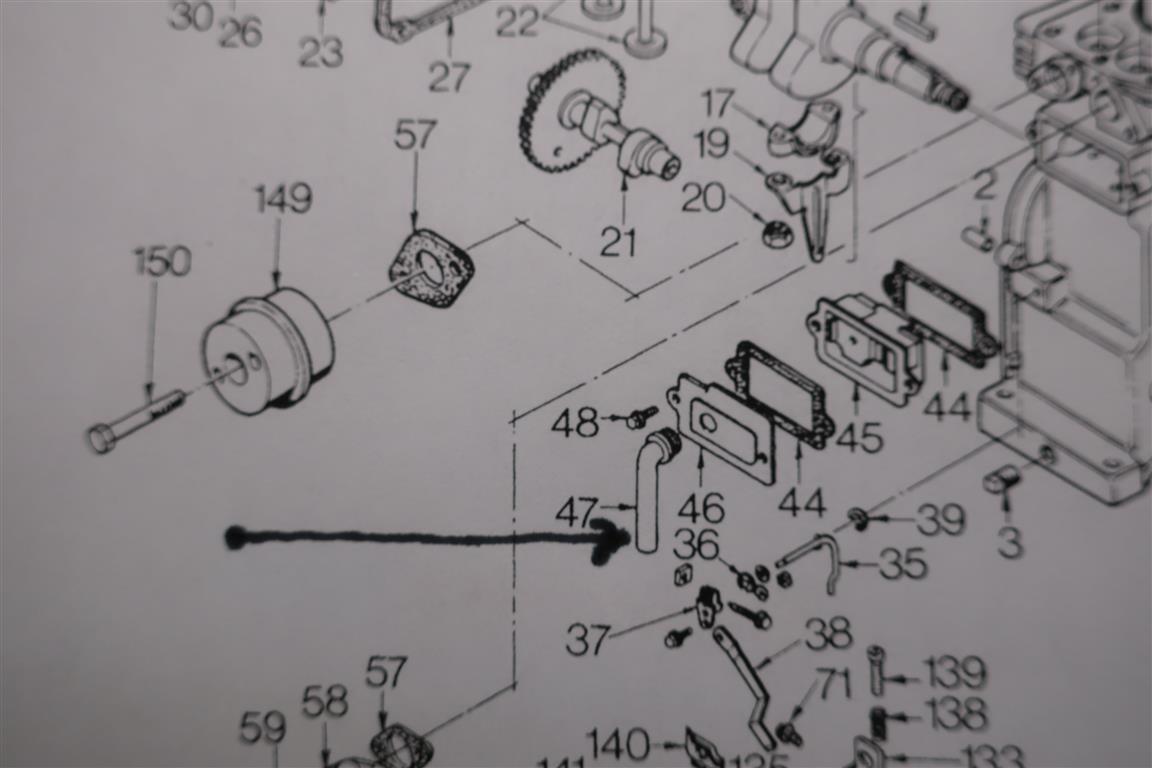 Governor linkage . Not exactly the same as yours but near enough to get the idea of whats required 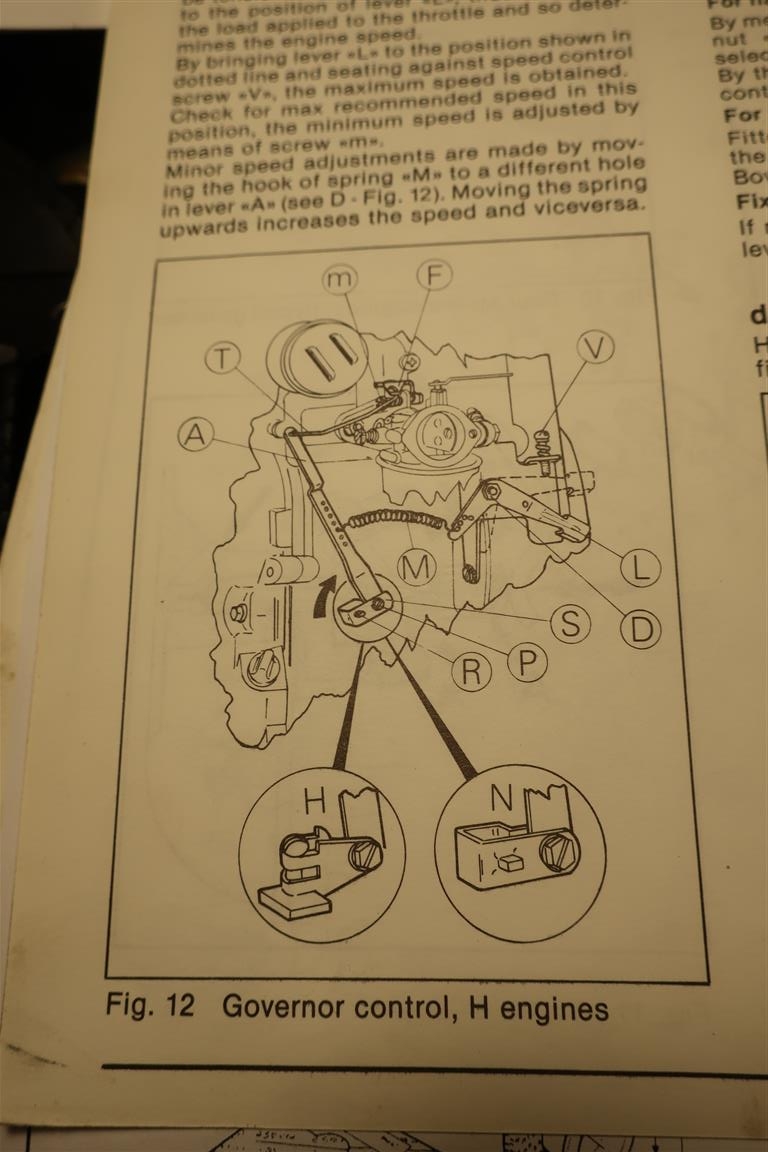 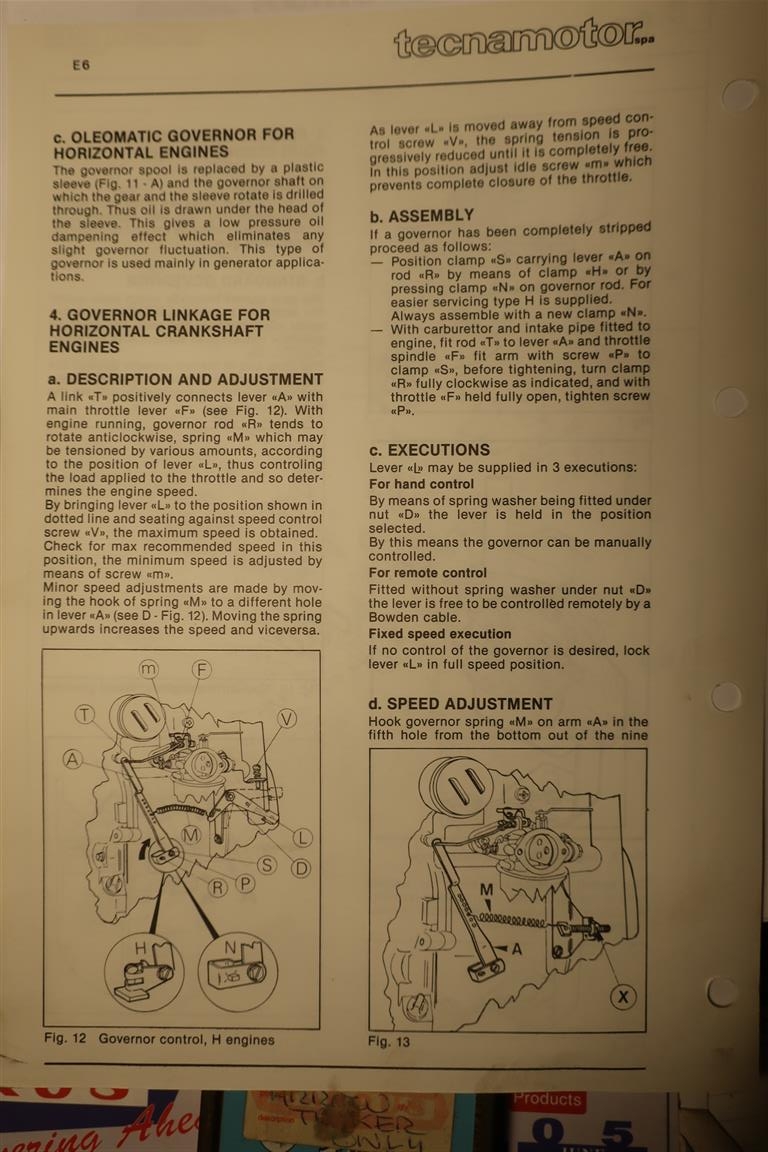 Yes, apologies Wristpin, well a lot there to consider. First, I'm afraid those images don't really help. They show a governor arm with several holes mine has only one at the top so I think the new governor spring I got goes somewhere among the linkages on the carb itself. The rubber engine breather doesn't connect to the carb breather. The piece i think I'm missing is seen in red on pic below. I have two empty screwed holes as married on pic which appear to be for the two screws naked on other pic. 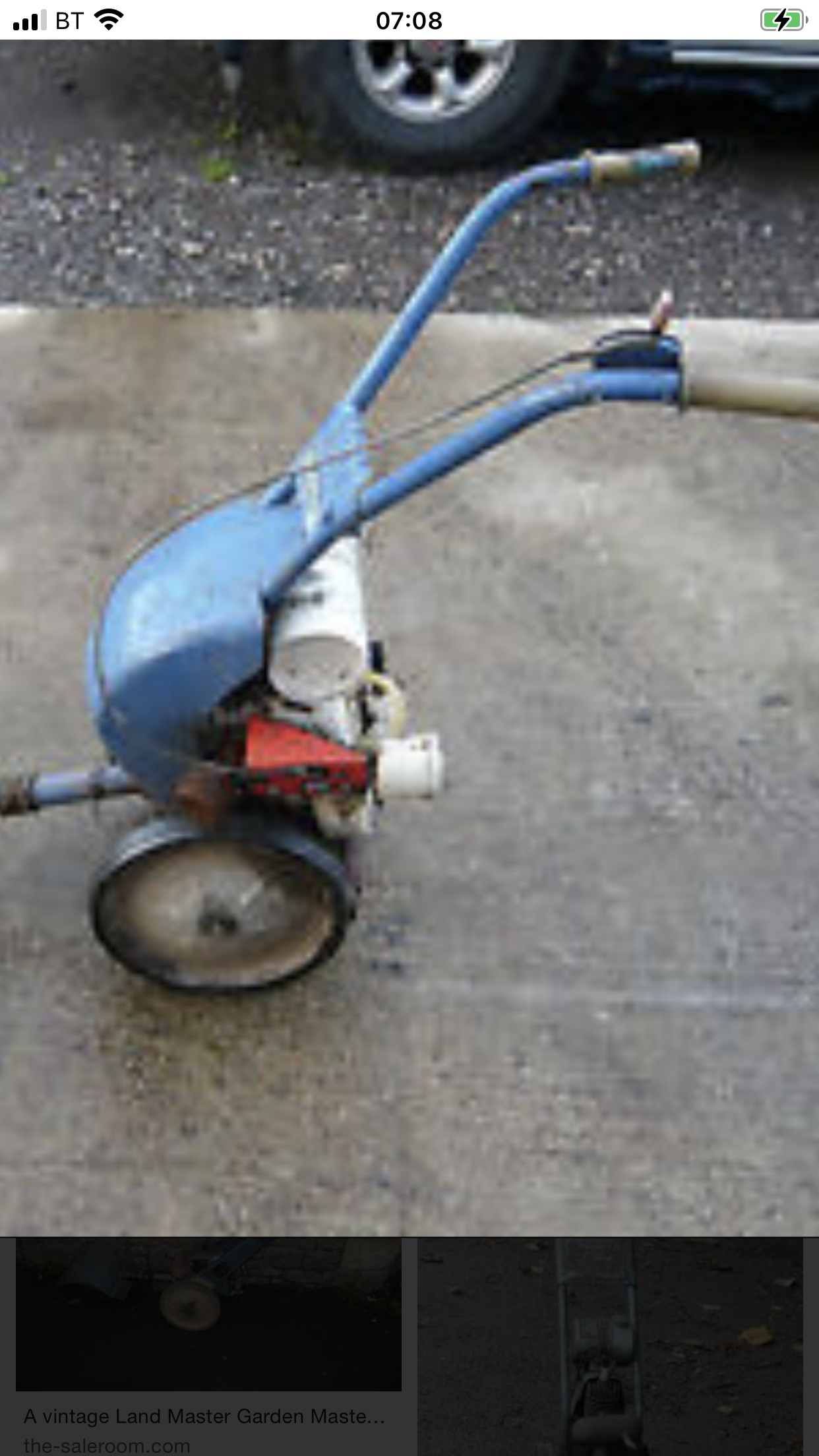 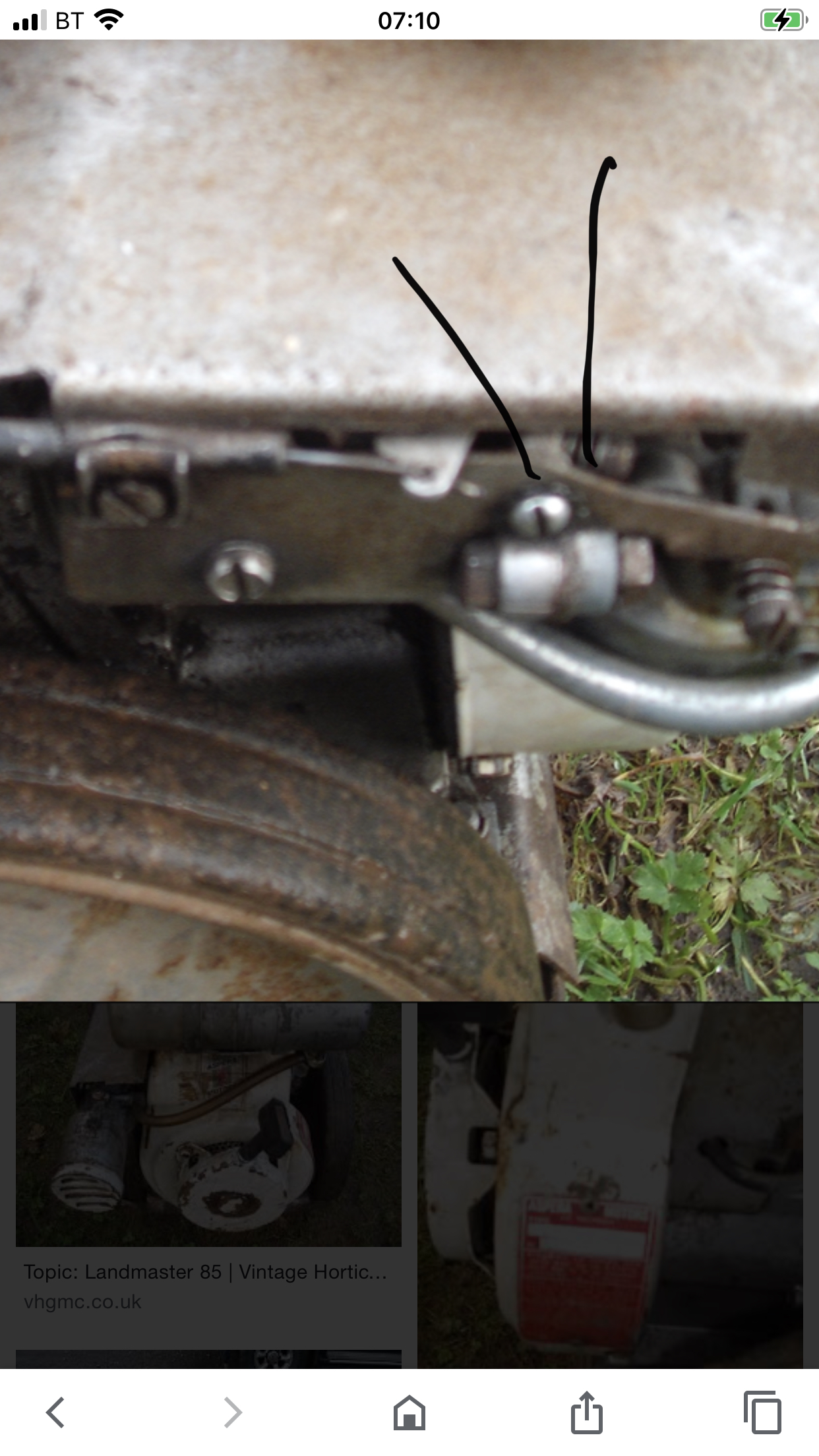 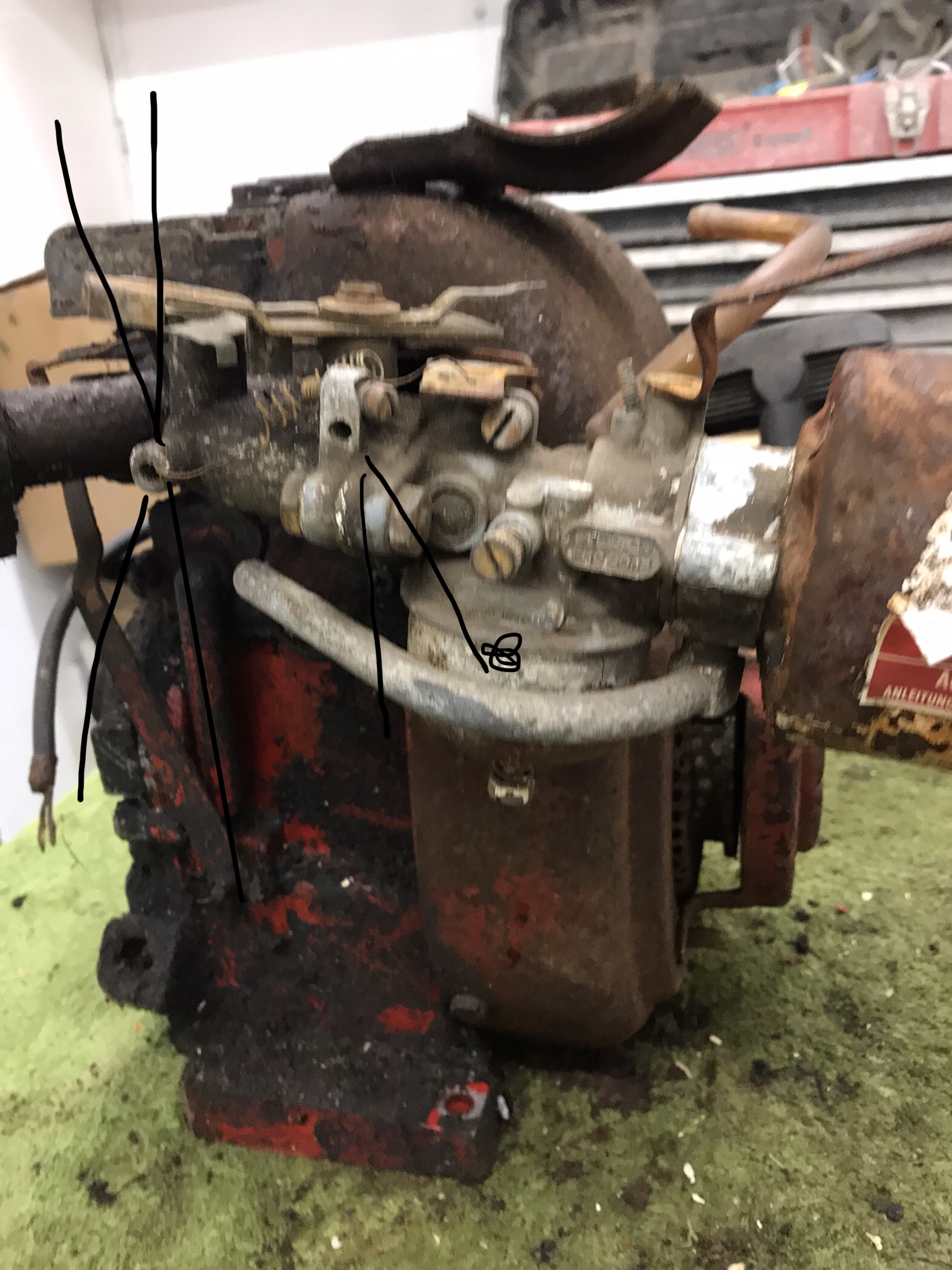 Don’t think so , difficult to

There isn't any point to the pipe, unless it is to provide clean air to the breather system and as far as I can see, your parts list doesn't show the pipe

Thanks, your right, it doesn

Thanks, your right, it doesn't but it does show a breather joint item 123 and next to a  spring 132 no idea what that is. Anyway it was looking original so I'll leave it, can't do any harm. The brick wall is the cable fixture and where the governor spring goes. Think I can make a bracket for cable as I can see clearly where it goes but the spring I can't. It defo doesn't go to the governor arm like normal, there's only one hole and that's for the rod that goes to throttle. There's three hole in the throttle arm which likely takes one end of spring but there's no other place for other end as far as I can see

That cover marked in red is

That cover marked in red is what I was trying to describe in post #2 but in your application it would need a horizontal slot for the throttle lever with the flanged / turned over end to pass through.

Im wondering whether your machine is as it left the factory or whether it may have acquired a different carburettor somewhere along the way. None of my parts or workshop manuals exactly match your set up.

Basically what you are missing is a means ( via a spring) of applying an opposing force from that flanged throttle lever to the governor arm or link. I can think of a couple of ways of achieving this but it would need a bit of experimentation .

Is the image with the red cover a stock / library image or of a machine known to you ?  As I see it your machine with its present carburettor , never had a cable operated throttle .

I suppose anything is possible but  my machine has a throttle lever and cable just like all the library pics I've seen. None of it looks homemade or altered so I'm going to assume that somewhere out there there's a machine like mine that will solve the issue, I'll just wait a while. Cheers everyone

OK, after a quick google, I

OK, after a quick google, I found this: http://www.tractorbox.co.uk/forum/printer_friendly_posts.asp?TID=6584

About half way down the page is a photo showing the breather pipe connected to the pipe around the fuel chamber.

About half way down the page

About half way down the page is a photo showing the breather pipe connected to the pipe around the fuel chamber.

Spot on! Solid pipe joined to rubber breather from the valve chest cover. Not managed to enlarge it enough to see the Governor linkage but I think that I know where that machine lives.

Bloody Nora, Bingo, thought I might be waiting a while!!!  He seems to have two 85 with Asperas one with the red cover one without. Coincidentally I recognise some of those images from previous searches but not the engine ones just the painting ones. Do you think he will help with some pics?

As can be seen, the owner of

As can be seen, the owner of the machines on the VHGMC site has a fair collection . I have corresponded with him to day and unfortunately most of his collection is packed away and not readily accessible . In more normal times they would come out for shows and exhibitions but at present most are well buried .

I’ve had a good look through some other parts books and workshop manuals and am still unable to find anything that matches the set up in your images and am driven towards the conclusion that the throttle / governor  link is incorrect. I’ll give it a bit more thought and post again tomorrow with a suggestion.

I am sure there is a degree

I am sure there is a degree of mix n match with an older engine and slightly newer carb/airfilter.   The type of throttle arm reminds me of the type that we thought of as "the old type" at the time I entered the machinery world, YTS 1980/81, whilst the carb butterfly top plate is what became the normal style perhaps early/mid 1970s and on..

As currently connected up it looks to me as if the governor arm would in fact open the carb butterfly spindle rather than close it...?

If the gov link rod was moved to be in the small hole on the opposite side of butterfly spindle top plate then I think things would be pulling in the right direction.?

Then the spring, which looks damaged, from one hole of the three in a line on the throttle lever arm and into the hole on the butterfly top plate, where the gov link is at the moment...then I think things may at least turn in the right direction.?   I hope.!

The long slot on the lower plate of the throttle arm is I believe related to choke operation on another application...where cable is moved past fast run to apply choke to start.  This carb has a manual lever so whilst it was part part of the throttle lever make up its action is not used in this application.

Just a few observations...am I thinking in the right direction.?

I tried a few google searches with various phrase starting points.  I like to use images search first...and found the carb photo on this 2017 discussion  https://www.google.com/url?sa=i&url=https%3A%2F%2Fmyoldmachine.com%2Fto…

yes that's making sense. I can't assemble it completely yet to try that, theres two circlips that retain the governor spool and assembly  on the governor shaft, the inner one was missing, the assembly and spool all moved together along the shaft instead of the spool moving independently of the assembly!!! Once I have that I can start assembly and get back. Cheers once again and a HNY to all. (-:

As Clive says  - I am sure there is a degree of mix n match with an older engine and slightly newer carb/airfilter.

That is appearing to be more and more of a possibility. The only thing that conflicts with that is that the OP's machine is shown with a cable operated throttle but the throttle lever does not appear to have a hole for the cable . What seems so strange is that my manuals and parts lists that go back to the 70s dont give a clue.

This image is from a similar set up on a vertical shaft engine  - the obvious difference being that the governor arm is emerging from the block at the air cleaner end rather than the manifold end. However it does show a possible solution using a dog leg link which could, perhaps be reversed. Also, there is a hole in the "manual" lever to accommodate a remote cable. It also shows the slot being used for "automatic" choke operation. 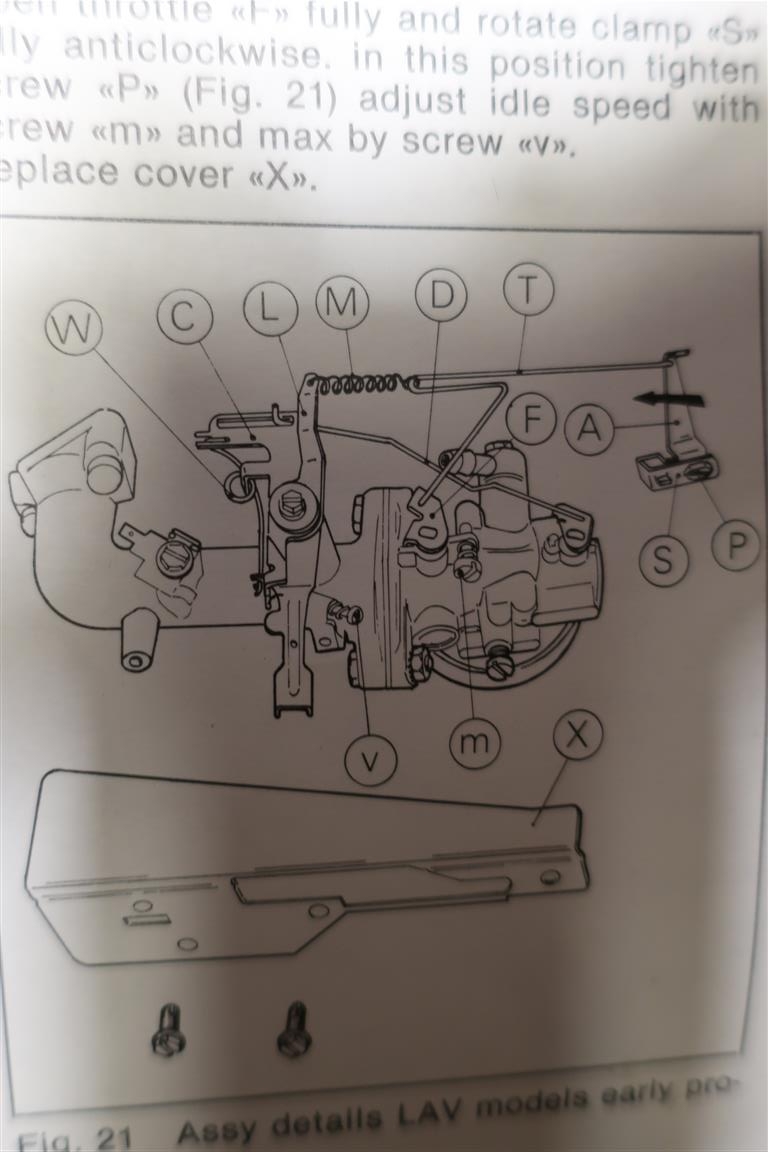 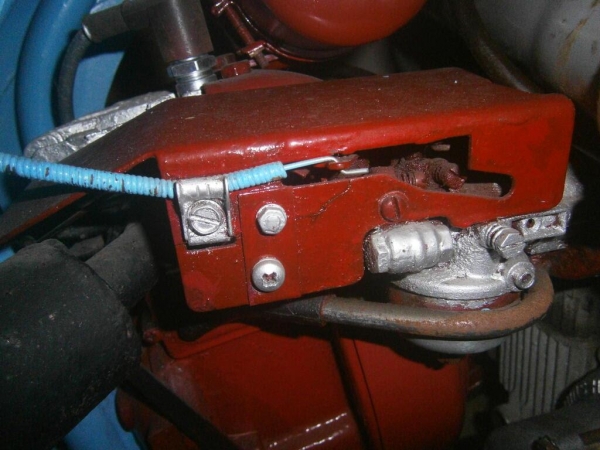 This shows that for cable control you need the cover. Also shows that throttle lever for remote control is different from the one on your carb. Suggests that either your machine was not originally remote control or that it was, but was subsequently fitted with a manual control carb.

Well done !!! Yes I'd come round to that conclusion and this confirms it. On the basis the throttle control on the handle bars is the same as all the other pics I've seen and is attached ' proper like' I think its original and the carb isn't. So now on the hunt for a scrapper cheers

ps where did you find pic?